9 ways I improved my productivity in Visual Studio 2013

Visual Studio is a powerhouse of an IDE. One of the first things I came to appreciate when I first starting learning C# and ASP.NET MVC was how great a developer tool Visual Studio was. It far exceeds previous tools I’ve used in other languages such as Java and PHP.

As with all IDEs I’ve used I’ve always been fond of trying to get the best from them in order to improve my productivity, so as soon as I started using Visual Studio I immediately started researching features and functions to aid my day-to-day development, and over time I’ve built up a repertoire of common shortcuts that help me spend more time writing software and less time navigating the Visual Studio functions and menus.

I’ve always believed that one of the best ways to improve your productivity is to optimise your workflow. To do this I like to pay attention to the tasks I regularly perform when programming and see what can change about these behaviors to speed them up. For instance, I noticed I was creating classes a lot, so I got into the habit of using Resharper’s create class shortcut (ALT + Insert). This minor adjustment to my workflow dramatically reduced the time it took me to create a new class, whilst helping me stay in the zone by not having to break my concentration by taking my hands off of the keyboard and reaching for my mouse.

Optimising workflow is all about rewiring our habits and training our muscle memory so you get to a point where you’re pressing shortcuts and performing tasks without needing to consciously stop and try to remember the necessary shortcut. This takes time, but only a few days of constant use.

With this in mind I’ve decided to highlight some of the shortcuts and functions that helped me the most in improving my productivity in Visual Studio 2013.

Without wanting to sound like an Jetbrains’ salesman, I honestly believe the best thing I did to improve my productivity within Visual Studio is to start using Resharper. The folks over at JetBrains have done a fantastic job of implementing some real time-saving features into Visual Studio via their plugin. They offer a 30 day free trial so at the very least give it a try and you’ll see what I mean.

If you don’t believe me then watch the below video: 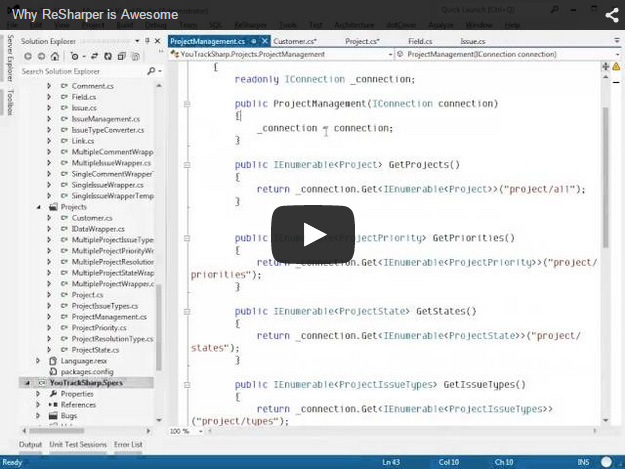 Peek Definition is a fantastic feature that really helped speed up my development. It particularly comes in handy if you’re working on a method that calls/references another class or method that you need to browse at or modify. Before Peek Definition was introduced in Visual Studio 2013 I would have to rely on Resharper’s CTRL + F12 shortcut that would take me to the implementation of the method or class – resulting in the whole class being loaded in another pane and breaking my flow.

With the introduction of Peek Definition into my workflow I’m now able to quickly open up the method/class using the ALT + F12 shortcut (I’ve changed it to ALT + Q for quicker single hand access) and analyse or make modifications to it without needing to leave the class I’m in. This helps keep me in the zone and focusing on what I’m doing.

Additional tip: Use the Esc key to close the peek definition window – this way your hands don’t have to leave the keyboard.

Another really useful feature is the ability to quickly switch between all open tabs within Visual Studio using the CTRL + TAB shortcut. Pressing this will open a popup window with all active (open) files that you can quickly navigate to using the up and down keys on the keyboard and then release to load the selected file.

What’s especially powerful about this feature is the fact that it automatically selects the last file you opened, meaning you can quickly press CTRL + TAB to go back to your previous file . This is particularly useful if I’m working between two classes such as an interface and an implementation of the interface.

I was using Visual Studio 2013 for about a year before I learnt of the new enhanced scroll bar feature, and after enabling it I quickly realised how much of a benefit using it over the traditional scroll bar would bring.

Not only does the enhanced scroll bar help you navigate your way around a class, but it also highlights any code changes you’ve made, along with errors, bookmarks and even your caret position.

You can enable the advanced scroll bar by right clicking the scroll bar within your code editor and selecting “Toolbar Options”. You can also access it via Tools > Options > Text Editor > All Languages > Scroll Bars.

Within the scoll bar’s options you have an array of choices allowing you to specify exactly what you’d like to see highlighted on the scroll bar. As I like to keep my code window as large as possible I opted for the narrower scroll bar that whilst still providing all of the normal feedback, doesn’t take up as much room as the medium or wide scroll bar. 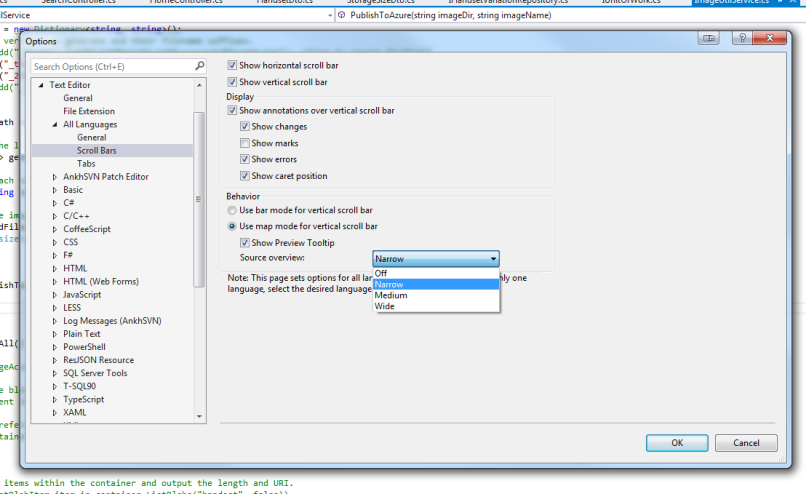 As mentioned in tip 1, if you’ve got ReSharper installed then you’ve already got access to some fantastic time-saving shortcuts at your disposal that really go a long way at helping you improve your productivity when programming. One such shortcut that will dramatically improved my productivity was the use of Resharper’s GoToFile shortcut (CTRL + SHIFT + T).

The GoToFile shortcut is probably one of Resharper’s most powerful sortcuts that allows you to quickly locate anytype of file within your solution, including views, CSS files and Javascript files. What’re more is Resharper’s GoToFile dialog has the ability to pattern match all sorts of strings. For instance, if you wish to locate a class named “LoginRepository.cs” you only need type “lr” and Resharper will display a list of all files matching your query.

Another time saving shortcut that really helped me speed up my code navigation and saves  me from taking my hands off of the keyboard is the GoToDefinition shortcut (F12).

When your keyboard cursor is over a class definition, simply press F12 to quickly open the highlighted class. The same also applies for interfaces. Whilst this may seem like a simple shortcut, when using it becomes a habit you’ll realise how much time you’ve wasted navigating to a class via the mouse.

Without wanting to make this post too Resharper focused, another great shortcut at the disposal of Resharper users is the GoToFileMember shortcut (ALT + ).

Using the GoToFileMember shortcut I’m able to quickly navigate to a property or a method in a few key strokes.

Simply press ALT + \ and you’re promptly greeted with a list of all of the classes methods and properties. In addition to this you can also quickly find the property or method you’re looking for via the GoToFileMember dialog’s search field.

I learned about this feature later on in my Visual Studio experiences, but it quickly became my staple way of creating constructors.

Next time you need to create a class constructor, instead of typing the entire constructor out type “ctor” and then hit the tab key immediately afterwards. This will instantly add a constructor to your class for you.

In addition to creating constructors as highlighted in the above tip, Visual Studio has a similar feature for properties.

Next time you need to create a new property simple type “prop” followed by hitting the tab key to quickly create a property. Typing the type and the pressing tab again will then automatically take you to the next definition along the declaration. You can also press Shift + Tab to go back to the previous definition.

If any of these features are new to you then the worst thing to do at this point is to try out the tips mentioned and leave it at that. Improving your productivity in a tool like Visual Studio doesn’t happen overnight and takes repetition to build these shortcuts into your muscle memory. But once they are well practiced you’ll really notice a difference in your workflow.

Don’t stop there. It’s always important to stop and take an honest look at your workflow and ask yourself “What tasks to I constantly repeat, and what an be done to reduce the time it takes to perform said tasks? Is there a shortcut or Visual Studio extension that I could learn or use to speed up the time it takes me to perform such an action? Generally I find the answer is yes!.