Worth a watch: John Sonmez on creating a test automation framework using Selenium

Unit tests are great at testing individual, isolated pieces of functionality and go a long way in instilling confidence when writing code and especially when modifying or maintaining and existing code base. Another valuable form of testing is Test Automation; and if you’ve ever worked with automated tests before you’ll no doubt agree that coupled with unit tests, test automation goes an extra mile in ensuring you’ve got maximum test overage of your system.

Test automation, much like writing unit tests, requires an initial upfront investment in writing the actual tests - but once created, these tests become increasingly valuable as your project grows and ages. However, unlike unit tests there is an even greater investment required in creating the initial framework with which to build your automation tests upon. This important step requires a good deal of thought and planning to ensure the tests you write are as efficient and maintainable as possible.

Is this additional investment I talk of worth it in the long run? I certain think so and many others that have experience with test automation would also agree.

Luckily there’s a great talk by John Sonmez from SimpleProgrammer.com that takes you through how to create a Test Automation framework that I acts as a great foundation to write succinct, yet maintainable automation tests efficiently. 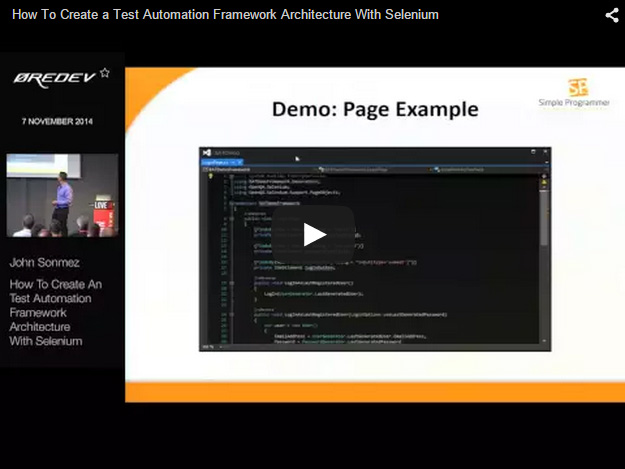